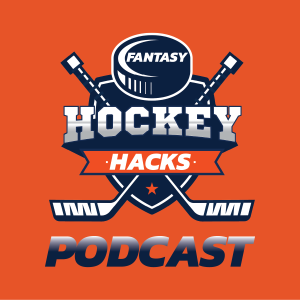 In the 52nd episode of the Fantasy Hockey Hacks Podcast, the FHH team discusses week 22 in the NHL – John’s List & Fantasy Lock Of The Week, Headlines With The Hacks, Ask The Hacks, and Edge Work (Schedule Notes, Week 22 Waiver Wire Picks). Subscribe to our podcast on all major directories; and stay up to date with the latest in fantasy hockey news and fantasy hockey advice. Be sure to visit LeftWingLock.com, the best source for fantasy hockey intelligence; and The Hockey Podcast Network for more great hockey-related content.

How many does he get in the third? #NHLStats: https://t.co/sqYC3jgQmR pic.twitter.com/qiVLQZCrpI

Patrick Kane’s name was all over the score sheet for the @NHLBlackhawks tonight. 🚨🍎🍎🍎🍎🍎#NHLStats: https://t.co/sqYC3jgQmR pic.twitter.com/Z7Ox9Paqz6

Alex Ovechkin of the @Capitals scored twice Tuesday to reach 766 goals in his NHL career and tie Jaromir Jagr for third place on the League’s all-time list.#NHLStats: https://t.co/sqYC3jgQmR pic.twitter.com/F4tqULpbx6

Berube says Buchnevich, who was hit high last night and went into concussion protocol, is not doing very well today and may not play tomorrow. #stlblues

Igor Shesterkin is having a historic season. pic.twitter.com/nM1OqePVif

Robin Lehner (VGK – G): Has been sent back to Las Vegas for some tests related to a lower-body injury. https://t.co/vu7rDhdVNg #nhl #VegasBorn

Stars Defenseman Miro Heiskanen has been diagnosed with mononucleosis and will be out indefinitely.

He has been placed on Injured Reserve retroactive to March 2.

Coach Blashill said he suspects Robby Fabbri has torn his ACL. Going for further evaluation but is expected to miss the remainder of the season. #RedWings

“It only took 7 years and me leaving for them to get into the game.”

Jack Eichel gives his thoughts on reaction received from #Sabres fans in his return to Buffalo.

“They must just be booing me because they wish I was still here.” pic.twitter.com/H5wAv1xfPF

Gabriel Landeskog started his postgame with an opening statement.

Matt Boldy scored twice, including a third-period game-tying goal. His 11 career goals after making his NHL debut on Jan. 6 trail only Kirill Kaprizov (16) and Kevin Fiala (13) for the most among all @mnwild players over that span.#NHLStats: https://t.co/gijpiRCzYv pic.twitter.com/xlWvr9zWXL

Jakob Chychrun (ARI – D): Has suffered a lower-body injury and will not return to the game. https://t.co/AW0bZQkpWZ #nhl #Yotes

I know that Brian Elliott is in goal; but to walk VICTOR HEDMAN…wow. 😳#LetsGoOilers #NHL #HockeyTwitter #FantasyHockey pic.twitter.com/VXkCgprT73

Scary scene in Ottawa as Connor Murphy is stretchered off the ice after taking a hit from Parker Kelly that sent him awkwardly into the boards. 🙏 pic.twitter.com/bd5xYeQtI6

pic.twitter.com/2Cm6Wlh600 Matthews getting a suspension or just a fine? Sound off in the comments with what you think. #LeafsForever

There are 49 games on the NHL schedule for the upcoming week(ending March 20th), with heavy action taking place on the usual Tuesday, Thursday, Saturday configuration. On the other end of the spectrum, Monday has just 1 contest which features the Ottawa Senators and Arizona Coyotes. Wednesday, Friday, and Sunday are more typical with 4, 6, 6 games respectively. The Arizona Coyotes play 4 games next week, but have 2 sets of back-to-backs; something to keep in mind if you are streaming an Arizona goaltender. Also good news if you picked up Nick Schmaltz or Shayne Gostisbehere recently. 8 teams will play 4 games next week (ARI, DAL, NYI, NYR, OTT, SJS, VAN, WSH), 6 teams will play just twice (ANA, COL, MIN, SEA, STL, TB), with the remainder of the league playing a standard 3-game schedule. The Ottawa Senators play the most games on “light days” (games with 50% or fewer teams in action), with 3 of their 4 contests taking place on slow nights, helping to optimize your roster’s number of games played.

Of the teams with just 2 games on the schedule next week, the Avalanche are the most appealing with matchups against the banged up Kings (6-3-1 last 10 GP) and the lowly Sharks (4-4-2 last 10 GP). Colorado beat the Kings 4-1 at Staples Center on January 20th, and defeated San Jose 6-2 at home on November 13th. With Gabriel Landeskog out for the next 4 weeks, there will be an opportunity for someone to fill-in in the top 6, watch the situation closely. Record This Season Against Upcoming Opponents: 2-0-0 | Players To Consider: Andre Burakovsky (64%), Valeri Nichushkin (20%), Alex Newhook (3%), Erik Johnson (35%), Pavel Francouz (41%).